Who will win the 2020 United States presidential election? 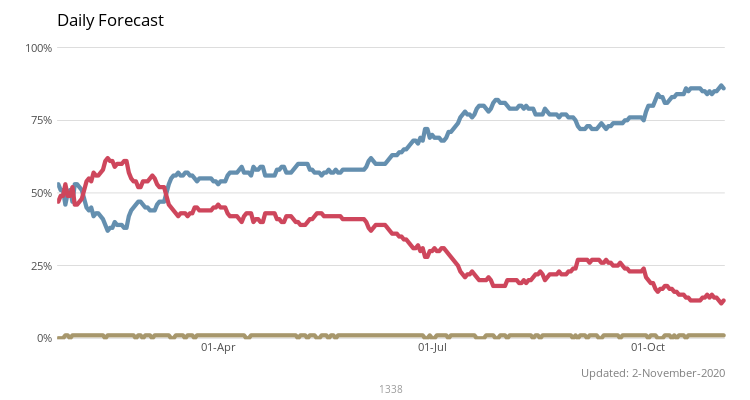 The 2020 United States presidential election is scheduled for Tuesday 3 November 2020.

Examples of Superforecaster commentary in italics

28 Sep 20 – Comment: Increasing on Biden a bit on the release of Trump’s tax records, and on the growth in Covid cases, such as in WI.

24 Sep 20 – Comment: I grew up in rural PA. A lot of bad pollsters in the state. But the ones I trust give a small lead to Biden.

18 Sep 20 – Comment: RBG has died. I think the comparison between Scalia passing and RBG passing (i.e., firing up the “base” of the affiliated party of the Justice that passed) is a good one.

18 Sep 20 – Comment: My intuition is that Ginsburg’s death helps Trump primarily in the sense that anything that shakes up the race is good for the candidate who is on track to lose.

11 Sep 20 – Comment: RCP looks at persistent polling error/bias in the Midwest, and many battlegrounds generally, during 2014-2018.

10 Sep 20 – Comment: Opinions are as fixed as they’ve ever been going into an election, and therefore poll volatility will be minimal. It more resembles 2012, when Obama and Romney were known quantities, than any other modern election.

08 Sep 20 – Comment: Biden has a consistent 8% advantage over Trump in polling with a lead that has widened just a tad over last week. Meanwhile, 270 to Win‘s Consensus Electoral Map continues to show a Biden win without needing any of the toss-up states. CNN Poll of Polls has Biden at 51% to 43%.

07 Sep 20 – Comment: Biden is probably leading in the Clinton states: PA, MI, WI, AZ, NE (290 electoral votes), though perhaps not by a lot. Trump is probably 50-50 or maybe even a little better in all of the remaining states. This election is not a done deal.

01 Sep 20 – Comment: Biden’s lead has narrowed a little since the Republican National Convention, but 270 to Win‘s Consensus Electoral Map shows a Biden win without needing any of the toss-up states.

30 Aug 20 – Comment: Continuing urban unrest, and the apparent denial of either its existence or the supporters of which organizations or ideologies are responsible for it, strikes me as more likely to act against the Dems between now and November.

16 Aug 20 – Comment: Plausible scenario emerging where the US wakes up on Wednesday morning with Trump “leading with 99% of precincts reporting” in enough states to win, but the election uncalled because of mail-in ballots that will take days/weeks to resolve.

12 Aug 20 – Comment: The 538 election model is out now: Biden 71%, Trump 29%, the same probability given to Hillary in 538‘s final 2016 forecast. To address the misperception that they predicted Clinton would win in 2016, they’ve also put even more thought into how to communicate probabilities.

07 Aug 20 – Comment: Trump’s campaign knocks on a million doors a week. Biden’s knocks on zero. And registers more, too.

05 Aug 20 – Comment: Lichtman‘s model favors Biden on 7 of the 13 keys to winning the presidency.

01 Aug 20 – Comment: Biden has been handed gifts; Trump himself, the gift that keeps on giving; a pandemic; a recession and double-digit unemployment; and an environment where he doesn’t have to go out and campaign.

28 Jul 20 – Comment: I have some concerns that keep me lower on Biden, including a potentially disastrous performance in the presidential debates. He has done very well in scripted performances, portraying the mild-mannered, steady temperament and leadership that many in the US are craving in uncertain times. He’s also had embarrassing errors or lapses in unscripted comments.

20 Jul 20 – Comment: After a quarter-century of closely fought elections, it is easy to assume that wide leads are unsustainable. Only Obama in 2008 managed to win the national vote by more than 3.9%.

17 Jul 20 – Comment: I’m betting a little more on Biden, thinking the polling is off, but not enough to swing to R’s. Registration isn’t a great margin for D’s. R’s are also super motivated, and where R’s are close in registration, I wouldn’t be surprised if they close the gap in those states.

13 Jul 20 – Comment: It would be hard for Trump to turn the election in his favor at this point. Surging cases in states that he needs to win (AZ, FL) make it even harder.

29 Jun 20 – The Economist says Biden has an 89% chance of winning. Comment: Trump’s ineffectual response to the pandemic, deep recession, and the protests is on the verge of costing him reelection.

01 Jun 20 – Comment: The riots just got Trump re-elected, as anarchy doesn’t play well in swing states. Counter-comment: This will further galvanize the anti-Trump folks, as well as mobilize the black vote that failed to show for Hillary.

26 May 20 – Comment: Two takes on how the economy might play out: the Abramowitz model predicts a Trump loss because of the expected negative second quarter GDP, while a top economist in the Obama administration believes potential record-breaking third quarter employment numbers and GDP will give Trump bragging rights.

18 May 20 – State polls suggest Biden has a clear national lead. Comment: Polling of late has consistently put Biden in the lead, but Trump maintains an overall financial advantage and commands the airwaves while Biden social distances at home.

09 Apr 20 – Comment: After a late-March spike, President Trump’s job approval ratings have fallen back into the mid-40s, suggesting the surge that presidents tend to see during a crisis was both modest and short-lived.

02 Apr 20 – COVID has profound impact on the campaign. Comment: Biden’s cognitive decline seems to be getting worse. After a solid debate performance against Sanders earlier this month, his subsequent interviews have been truly abysmal. Nevertheless, come November, Trump is likely to have three quarters of negative growth, double-digit unemployment, and a second wave of the outbreak.

10 Mar 20 – Biden surges in polling. Comment: Shifting a couple more points from Repub. to Dem. on a) polling showing Biden with a significant lead over Trump in the national popular vote and b) expectations about the effect of the coronavirus epidemic on the U.S. economy and Trump’s reputation. Counter-comment: If the Democrats could credibly argue that they would’ve conducted coronavirus policy differently, i.e. close the borders to Asian and EU flights, quarantine those repatriated cruise ship passengers for 14 days, etc) then the Democrats could have gained political points from coronavirus. But Democrats can’t, so seeing coronavirus as a ‘wash’ politically.

07 Mar 20 – The 2020 election becomes the dementiacampaign. Comment: Even if COVID-19 peters out in the spring/summer, the country will not be out of the woods. More likely than not, it will come back with a vengeance in the fall. I have to admit, though, that this forecast is not a confident A: 65% mainly because of Joe Biden’s cognitive decline and the potential that Hunter Biden will become the emails of 2020.

11 Feb 20 – Sanders wins New Hampshire primary. Comment: Increasing bin B based on Sanders increased chance of winning the nomination, due to a split between Klobuchar, Buttigieg, Bloomberg and lastly Biden for the moderate wing of the nominating process.

05 Feb 20 – Trump acquitted of impeachment charges. Comment: Incumbents (since Abe Lincoln) who have won their parties’ nominations have a 74% reelect rate. Incumbent-party successor candidates, by contrast, have a 36% win rate. Incumbency is a real advantage. However, he is also both historically unpopular, and his numbers remain in a very narrow band right at the bottom of what he needs to be reelected.

Copyright 2021 by Good Judgment Inc. This presentation is solely for informational purposes. The information contained herein are not to be construed as legal, business, investment or tax advice. No representation or warranty (express or implied) is provided with respect to the accuracy, completeness, or reliability of this presentation. The future is inherently uncertain, and investors should exercise prudence and their own judgment in making investment decisions. Neither Good Judgment nor any of its directors, employees, or agents accept any liability for any loss (direct or indirect), including investment loss, or damage arising out of the use of the information herein. Any opinions expressed in this document may change without prior notice.